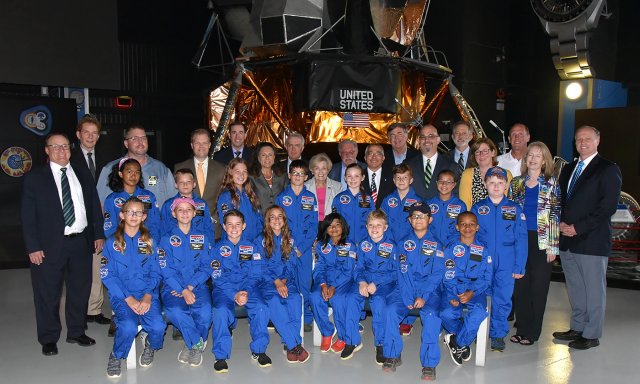 The students, recipients of an Air, Space, and Missile Defense Association, or ASMDA, scholarship, spent June 30-July 5 at Space Camp at the U.S. Space and Rocket Center in Huntsville. On July 3, the scholarship winners were treated to lunch by members of the ASMDA board and had a chance to speak with those who made the week possible.

"I don't think I am exaggerating when I say I am looking at tomorrow's heroes," said Dr. Steve Pierce, chief technology officer, U.S. Army Space and Missile Defense Command/Army Forces Strategic Command. "Each one of you need to realize that you are the future. Don't focus on promotions and don't focus on money. Focus on what you can do to make a difference.

Community leaders also talked to the campers and told them how proud everyone was of them for being selected and congratulated them on receiving the Space Camp scholarships.

"As you go through the Space Camp program you learn an awful lot," said Huntsville Mayor Tommy Battle. "You learn about science, technology, engineering and mathematics, and you learn to do some things you never thought you could do. As you learn these things, you start finding out you can apply that to later life and it is something I hope you can take away from this."

"I enjoy Space Camp a lot," said Christopher Deoki. "It is amazing and fun. My favorite thing is the MAT because it spins you around."

The students were selected for the scholarship based on an essay, school grades, interest in science and space, and financial need. The scholarship covers one week at Space Camp, travel, a flight suit, clothing package, a calling card and spending money.

"I have enjoyed Space Camp; it is awesome," Hinkle said. "Others should definitely come to Space Camp because it is fun and you get to train on cool stuff. I would come back if I could."