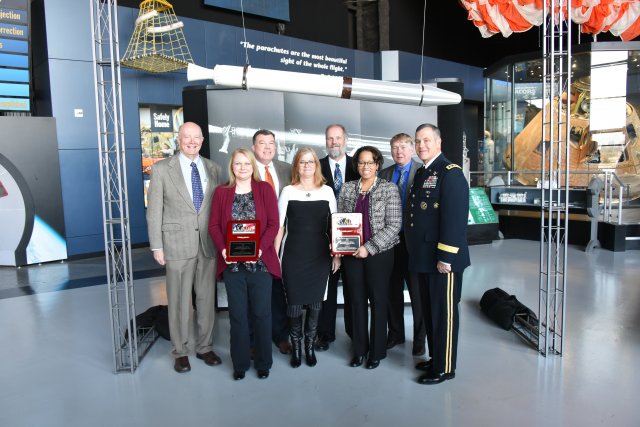 "Research and development of new capabilities has been one of SMDC's core tasks since it began, 60 years ago," Dickinson said. "SMDC's 60th anniversary coincides closely with another 60th anniversary, the launch of the first U.S. satellite, Explorer 1. Explorer's effect on the course of our history can't be overstated."

Dickinson spoke to the audience of more than 250 about his pride in the Army's legacy. Soon after building the nation's first space program, the Army provided the core facilities, material and personnel NASA and the Marshall Space Flight Center would become in 1960.

He explained how The Army Ordnance and Missile Command and Army Ballistic Missile Agency transferred 4,700 Army civil service employees and more than $100 million worth of buildings and equipment to the Kennedy Space Center and on Redstone Arsenal.

"From the Explorer 1 launch in 1958 to July 1, 1960, the Army achieved a series of pioneering efforts in space," Dickinson said. "It placed four Earth satellites into orbit; launched the free world's first lunar probe and first solar satellite; launched three chimps into space; led to the design of a 1.5 million-pound-thrust booster for a lunar exploration vehicle; and began work on the launch vehicle which would carry the first men into space."

He said SMDC/ARSTRAT's role has evolved over the intervening years and the command now provides forces for space and missile defense operations that protect every American and enhance the Army's warfighting effectiveness and lethality.

"We deliver critical space situational awareness and missile warning to the joint force," Dickinson said. "We build the Army's space cadre and execute life cycle management for more than 325 space operations officers supporting every level of command; we process, daily, more than half a million force tracking reports and disseminate them to hundreds of authorized users; we operate worldwide satellite communications for crucial U.S. and allied endeavors; we develop new capabilities; and we even provide U.S. Army astronauts to NASA."

Dickinson thanked ASMDA for supporting the nation's air, space, and missile defense efforts, providing a community that enhances the workforce and helping foster education for the next generation of youth.

"The Adventures in Engineering program gives my command and others a chance to expose local youth to the research, development, and testing that we do on Redstone Arsenal," Dickinson said. "You support our veterans across Northern Alabama and their families. The professional and civic involvement of ASMDA plays an important part in the strong and continuing relationship between the Army, NASA, and the Huntsville area that has lasted for more than 60 years."

Dickinson expressed his appreciation for ASMDA's recognition of the individuals and teams who play vital roles in the defense of the nation by developing leading edge air, space, and missile defense technologies.

During the luncheon ASMDA presented the Service Excellence Award, in the Team Category, to the SMDC Technical Center's Flight Experiment-1 Execution Teams -- Government and Contractor -- for their contributions to national defense. The award was accepted by Lee Ray, on behalf of the government team, and Bud Teague on behalf of the contractors.

The Flight Experiment-1 Execution Teams supported all aspects of a highly successful launch of a hypersonic weapon, critical to determining the capability of the system's future use for cross domain fires. The test was sponsored by the Office of the Secretary of Defense and led by the U.S. Navy.

"It is an honor to represent the command at the ASMDA awards luncheon," Ray said. "The awards for the FE-1 Government and Contractor teams mean a lot since the work performed by both teams is recognized. The FE-1 mission took a lot of hard work, personal sacrifices and tenacity for all involved. The mission was also exciting and fun at the same time as being very challenging."

"For the past 23 years, the Air, Space and Missile Defense Association has been supporting those missions in the community and promoting items such as providing scholarships for STEM (Science, Technology, Engineering and Math) students, Space Camp scholarships, and exposing students to opportunities on Redstone Arsenal through Adventures in Engineering," said ASMDA President Julie Schumacher. "Today is very exciting because we get to reunite with members of the community as well as hosting it in such a spectacular venue as the Space and Rocket Center's Davidson Center."